In The Fight Between Good and Evil, Can Evil Win?

In this heart wrenching article in New York Times  called “Bahai on Trial in Iran Worries Brother From Afar”  By SAMUEL G. FREEDMAN Published: January 22, 2010 we see another close up of pain and agony of one loving brother for his younger bother. Unfortunately there are so many brothers and sisters all over the world who are worried about their fellow brothers and sisters. We are all cells of one body, waves of one sea, leaves of one tree. If we see ourselves to be a member of this body of humanity, then we must feel the pain of our brothers and sisters and speak up for their human rights. May God hear our cries and not leave us to ourselves in this noble endeavor.

Rezvan Tavakkoli, in Clinton, Md., is awaiting word about his brother, a Bahai leader in Iran who faces a possible death sentence. 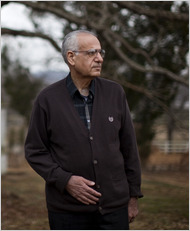 Rezvan Tavakkoli, in Clinton, Md., is awaiting word about his brother, a Bahai leader in Iran who faces a possible death sentence.

They have endured beatings, insults, arrest, vandalism, dismissal from jobs, denial of education and other forms of religious bigotry inflicted by the Iranian Muslims who consider Bahaism an intolerable blasphemy for its belief in a 19th-century prophet and his new revelation emerging from Shiite Islam.

Nothing in this pageant of hatred, however, had quite prepared Mr. Tavakkoli for the present moment. He sat this week in a home a dozen miles outside Washington, a 66-year-old man clad in flannel shirt and cardigan against the January chill, as his younger brother Behrouz awaited the verdict of a secret court in Iran, one of seven Bahai leaders facing a potential death sentence for charges of espionage, propaganda and the all-purpose calumny of “spreading corruption on earth.”

It somehow matters to Mr. Tavakkoli, it compounds the sensation of impotence, that he is the eldest child of six in his family, the paternal figure, the one with the impulse to protect. “I am regretting I am here,” he said in his American living room. “My hands are tied at this distance.”

We all share this feeling of helplessness in fighting the evil of human rights violations and abuse by the hand of those who have power. May the Luke Skywalker’s of humanity acquire the force and lead us all into peace and tranquility. All children are looking up and waiting.

The Global Community Remains Helpless in the Face of Human Rights Violations in Iran.

“To Kill an American” Chain Letter Serves as a Loving Reminder