My Pilgrimage to Rajaei Shahr Prison on December 14th 2010 Chant 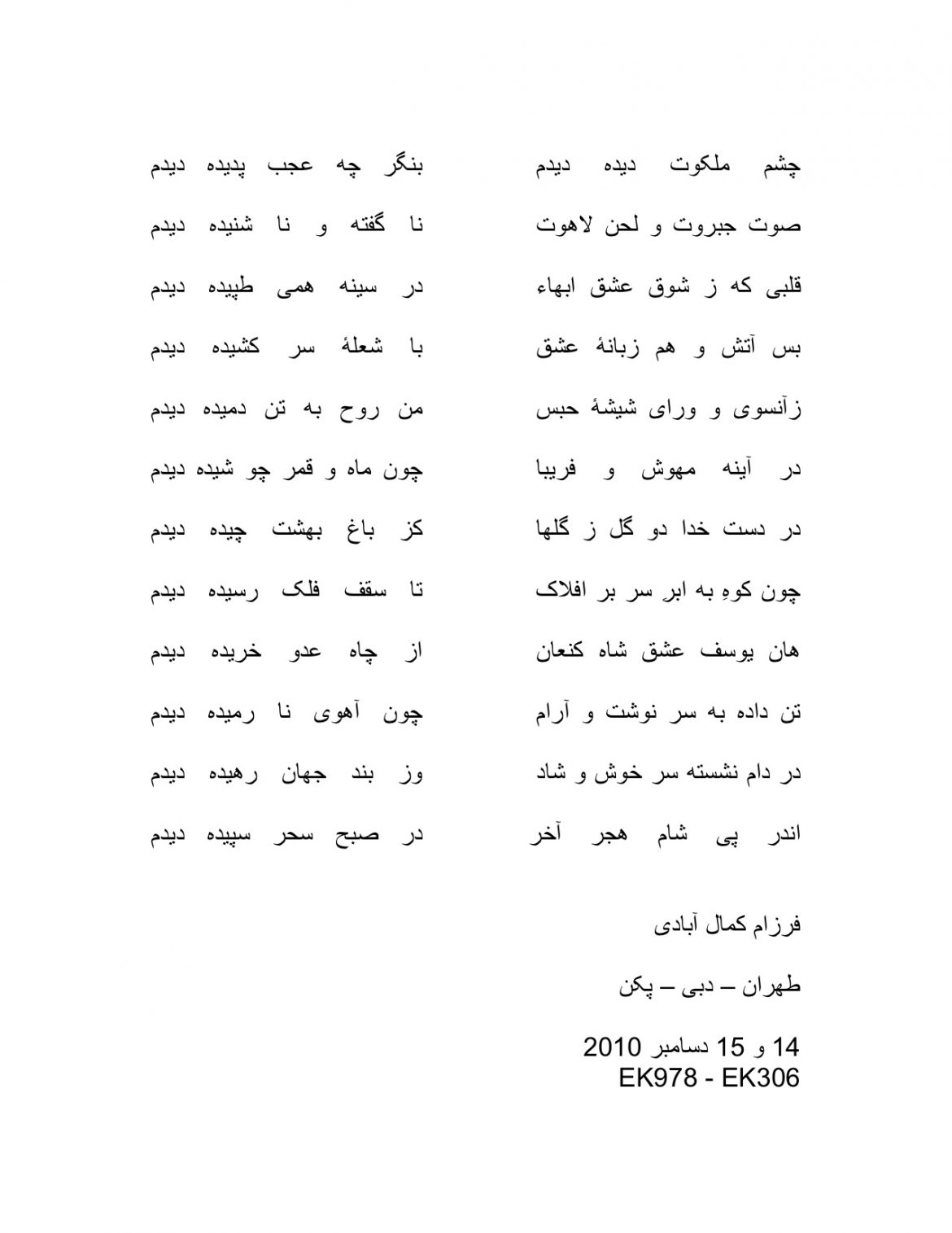 My Pilgrimage to Rajaei Shahr Prison on December 14th 2010

Farzam Kamalabadi is the older brother of Fariba Kamalabadi one of the seven former Baha’i administrators of Iran who was arrested, has been kept in prison for over two years and sentenced to ten years for being a Baha’i.

Farzam had a brief visit in Iran and his visit would have been incomplete without seeing the beautiful and innocent face of his sister Fariba. With great difficulty and eventually through the grace of God, he gets a chance for visitation from behind a glass wall.

The poem I am chanting speaks of the fires that burns his heart after seeing his sister.

I like to add that Farzam’ dad, Dr. Kamalabadi died some years ago after imprisonment and as a result of torture and beating he was inflicted while in prison for being a Baha’i in Iran under Islamic Republic Regime. It is an honor for me to share their pain and witness their glory. Keyvan Geula 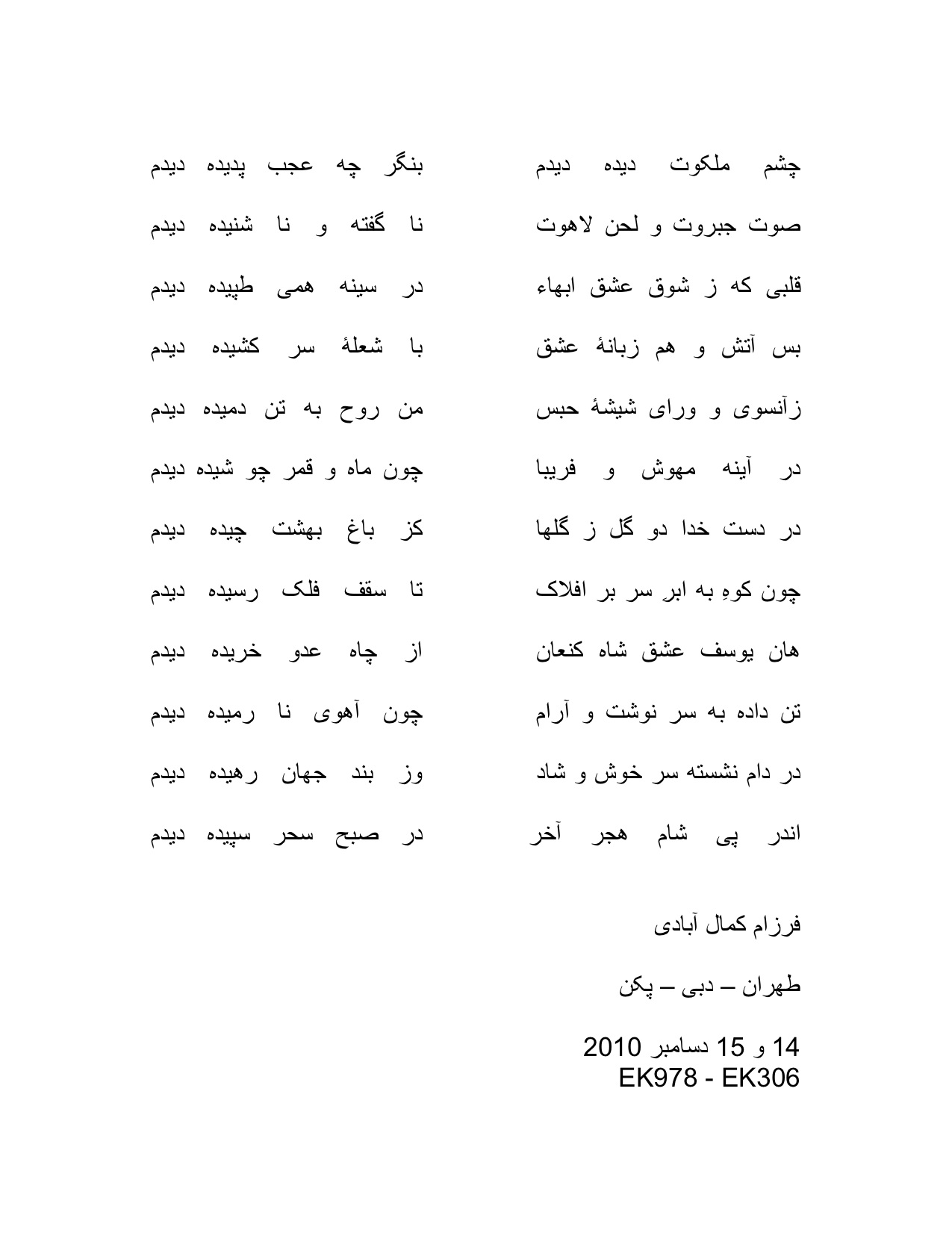 Koohyar Goodarzi Letter about All Human Respect Others Right to Education

Dear friends, Rozita went to court yesterday (23/1/11) and I have the following information in relation to the court hearing:

Rozita’s lawyer was allowed to be present in the court and has told us that Rozita was very strong and talked with confidence in the court. Rozita said in the court to the Judge : “You are talking about something which does not exist in the Iranian Constitution . I believe I didn’t do anything wrong.”

The judge, told her ; “I can keep you in the prison for as long as I want.”

Rozita responded: “It is okay, and I am thankful as they give me some food and I have a place to sleep.”
Rozita’s Lawyer said : There was not any evidence to show Rozita did something wrong.

People in Iran have told me “Her judge is known as a difficult person and he is hard-hearted”,

The final message for me from Iran is that the Judge will not be kind and we must accept another sentences for Rozita in the future. we need a miracle. We are waiting for the final decision from the court but we don’t know how long before we will know.

Dear Rosa, The whole population of Iran is in need of divine intervention. The level of human rights violations has superseded any other nations in the world. I am not surprised by their verdict. Perhaps this is divine justice that the Islamic Republic Regime will not have any credit to do good and only evil will be written in their records especially towards the innocent Baha’is who the whole world loves and respects. As the poet says, the moon shines it splendor and the dogs bark. Every one does according to their own capacity. (mah feshanad nooro sag oo konad; har kasi bar tinate khod mikonad)

I am not a Baha’i nor any other religion however I believe everyone has the right to practice any faith they want. It is a personal and human right violation to impose a faith on someone. I am so angry at the IRI for trying to force their ridiculous beliefs on people. They have absolutely no evidence that their faith is better than anyone else. Even if it was, should it not sell itself to the people rather than forced down their throat? Let’s wake up people of the world and realize there is only one life and it is not eternal. there is no after life as we all know. So live and let live. I wish I were a wizard, I would personally take care of those in IRI who violate human rights. They are no better than Hitler as far as I am concerned.