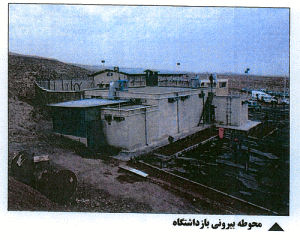 Regime is transferring the women political prisoners to “Gharechak ” prison in the city of Varamin !

The families of the women political prisoners in ” Rejaei Shahr ” prison, whose loved one’s were transferred from “Rejaei shahr” to “Gharechak” in the city of Varamin said; “Gharechak” prison in the city of Varamin is the 2nd “Kahrizak ” prison. As we all know ; Kahrizak was the prison, where many Iranian youth protesters after the presidential election coup were transferred, tortured, sexually assaulted and then brutally murdered. Several Islamic Republic regime officials including Hossein Taeb, judge Said Mortazavi , Radan , Zolnoor and ….are suspect to these murders.Because of disclosure about Kahrizak prison by the green movement leaders including Mr. Karoubi more attention were focused on that prison. Now , it has been said that ; the prison officials are also transferring the women political prisoners of Evin to “Gharechak” prison in the city of Varamin.

The women prisoners told to their families that, this prison is like Kahrizak , because the prison official don’t give them food and water on time. The women prisoners said; when they protested to this situation ,they were attacked by Baton and some of them were injured.They said; this prison look more like a ” hencoop”. Ms. Shabnam Madadzadeh is one of political prisoner who was transferred from “Rejaei Shahr ” prison to “Gharechak ” prison in Varamin.She said; the situation is so bad ,the prisoners can’t tolerate even a day and if this situation continues they will go on hunger strike.

In a letter to Mr. Mohammad Sadegh Larijani the head of judiciary power, the women political prisoners asked: “What is the goal of treansferring the political prisoners to a prison located far from their place of residence (Internal exile)? Is it not to create a condition for their gradual death ?

The “Gharechak ” prison like “Kahrizak ” prison is located around Tehran. The families of the women political prisoners have no news about their loved ones and are worried about their situation.”

I must add the two Baha’i women former administrators, Fariba Kamal-abadi and Mahvash Sabet are amongst these women prisoners transferred away from their families and relatives in Tehran.

There are too Many People in Iran who Witness Injustice and Do Nothing!