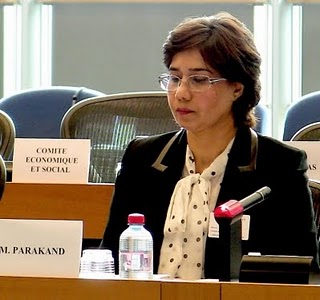 Lawyer for jailed Baha’i leaders speaks out at European Parliament

Mahnaz Parakand, one of the legal representatives of the seven Baha’i administrators imprisoned in Iran, has escaped from Iran for her own life and is now free to speak he conscience before the free world. What she knows, she has experienced and she has been wanting to say is now possible and of great concern to the Islamic Republic Regime of Iran. Strange as it sounds, the Islamic Republic Regime of Iran believes the people of the world look up to what they do and how they go about doing it and wishes to have everyone’s continued applaud and celebration of how they treat their citizens including the Baha’is of Iran!!! I know this is hard to believe, but they really are of such belief!!! Iran is proud of its policy of : “Education not for all”!!

The question that the free world has to ask itself is; have we done enough to make it clear to Islamic republic Regime of Iran how outraged the civilized world is, what we expect and how much we know about their on going violations of human rights.

The report includes the following;

A catalogue of injustices

Ms. Parakand is a member of the Defenders of Human Rights Centre, founded by Nobel Peace Prize laureate Shirin Ebadi, which handled the defence of the seven Baha’i leaders. At yesterday’s meeting Ms. Parakand was able to provide the first detailed account of what happened behind closed doors during the trial of the seven Baha’i leaders last year, presenting a long list of injustices and legal mis-steps by the Iranian court system.

These included the clandestine arrests of the seven – without summons – in 2008; their initial detention in solitary cells, without contact with their families; individual interrogations and their illegal imprisonment for more than two years without access to legal counsel; their trial on trumped-up charges; and the subsequent appeal procedure that saw their 20-year sentences reduced to 10 years, and then reinstated.

“The bill of indictment that was issued against our clients…was more like a political statement, rather than a legal document,” recalled Ms. Parakand. “It was a 50-page document…full of accusations and humiliations leveled against the Baha’i community of Iran, especially our clients. It was written without producing any proof for the allegations.

“There was only one bill of indictment issued for all the seven leaders…against all the legal standards, without specifying what kind of offence each one of them had been accused of,” she said.

The meeting heard that prior to the trial, during the two and a half years of illegal detention, neither Ms. Parakand nor her colleagues were allowed to visit their clients.

“We diligently studied the case file, which contained over 2,000 pages, over the period of one month and studied each page carefully, trying to find out how and based on what reason, document, proof or witness the freedom of seven individuals had been taken away from them in that manner. Fortunately, we could not find any document or legal reason proving that any of the accusations that were leveled against our clients were true,” she said.

“We were hoping that they would be exonerated, as there was no reason for them to be convicted.”

After reviewing the case file, the lawyers were allowed only one meeting with the prisoners. “Our visit with the clients was conducted in such a condition that the prison authorities were monitoring, and the women present were clandestinely taping our conversation…This act violates the right of the clients to freely describe what happened to them in prison,” explained Ms. Parakand.

Recalling the trial, Ms. Parakand spoke of numerous violations of legal procedures, and the presence in court of Ministry of Intelligence agents, intended to intimidate the defendants.

During the trial, the judge often cut short the clients’ defence statements on the pretence that their argument was considered to be ‘teaching Bahaism’, she said.

“The injustice imposed upon our clients…is a reflection of the oppression forced upon all the Baha’is who live in Iran,” added Ms. Parakand.

Ms. Parakand concluded by urging governments and organizations to demand that Iran modify its internal discriminatory laws against intellectual and religious minorities, and coerce those countries that violate human rights to follow precisely the content of the Universal Declaration of Human Rights and International Covenant on Civil and Political Rights.

She also appealed to the European Union to send a representative to Iran to investigate the situation of the seven Baha’i leaders, “to improve their unlawful current circumstances and to take necessary measures for their immediate release.”

Ms. Parakand’s appearance at the European Parliament was at the invitation of Barbara Lochbihler, a German MEP, who is the chair of the Parliament’s delegation for relations with Iran. Ms. Lochbihler assured Ms. Parakand that the situation of human rights in Iran is not forgotten.

In addition to the seven leaders, some 90 Baha’is are currently imprisoned in Iran, including nine staff and faculty members of the Baha’i Institute for Higher Education, still detained after raids on 39 Baha’i homes last month.

The Baha’i World News Service has published a Special Report which includes articles and background information about the seven Iranian Baha’i leaders – their lives, their imprisonment, trial and sentencing – and the allegations made against them. It also offers further resources about the persecution of Iran’s Baha’i community.

Another Special Report includes articles and background information about Iran’s campaign to deny higher education to Baha’is. It contains a summary of the situation, feature articles, case studies and testimonials from students, resources and links.

The International Reaction page of the Baha’i World News service is regularly updated with responses from governments, nongovernmental organizations, and prominent individuals, to actions taken against the Baha’is of Iran.

The Media Reports page presents a digest of media coverage from around the world.

Let us keep Mahnaz and all who keep the candle of human rights for all burning, in our prayers.

We Are All the Image of the Gods We Worship?