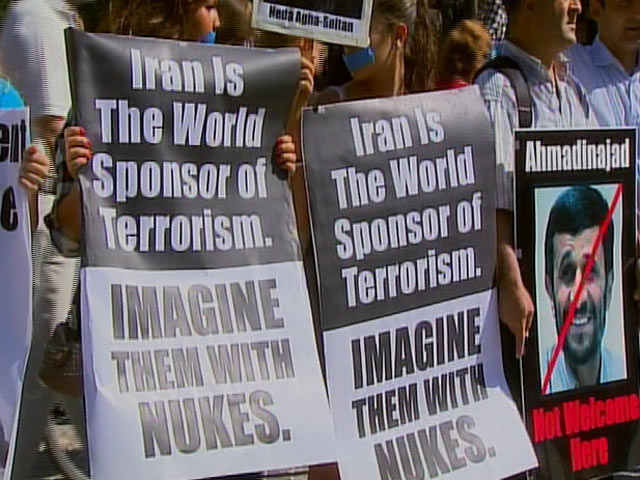 Ahmadinejad Arrives in New York on a Wave of Religious Repression

The protest reported by AP, is one of many expected in the week ahead, including another anti-Ahmadinejad protest scheduled to take place across from the United Nations on Thursday.

The article in NATIONAL REVIEW ON LINE refers to documented facts and the whole world has been doing everything a civilized world can do to stop the violations of human rights specially towards the Baha’is in Iran. The noble educaters and community leaders, are put in prisons and silenced for good! The question is what does the civilized world do and can do? The articles explains:

The government continues to target Baha’is. In 2008 it arrested seven Baha’i leaders and charged them with, inter alia, “insulting religious sanctities” “and “propaganda against the state.” When Nobel laureate Shirin Ebadi agreed to defend them, she was attacked in the government-controlled media and denied access to her clients’ files. In March 2011, the seven were told without explanation that, despite an appeals courts lowering their sentences, they would serve the original term of 20 years.

Seven Baha’i educators who are being held in prison in connection with their involvement in an informal community program to provide higher education for young Baha’is. They are (top row, left to right): Mahmoud Badavam, Ramin Zibaie, Riaz Sobhani, Farhad Sedghi; (bottom row, left to right) Noushin Khadem, Kamran Mortezaie, and Vahid Mahmoudi.

Since the regime bars Baha’is from higher education, and much else, they have formed a private Baha’i Institute for Higher Education (BIHE). On May 22, authorities raided 39 homes of BIHE administrators, staff and students. At least seven are still detained. On September 10, a senior lawyer for the detainees, Abdolfattah Soltani, was himself arrested. Soltani co-founded the Defenders of Human Rights Center along with four other lawyers including Ebadi. The center was shut down by police in December 2008.

Iran’s religious repression is not some minor quirk. As Nina Shea and I recount in our forthcoming book Silenced, it is at the heart of the regime’s ideology. Dissidents and dissenters are charged with “friendship with the enemies of God,” “hostility towards friends of God,” “fighting against God,” “obstructing the way of God and the way towards happiness for all the disinherited people in the world,” “dissension from religious dogma,” “insulting the Prophet,” “insulting Islam,” “propagation of spiritual liberalism,” “promoting pluralism,” “calling into question the Islamic foundations of the Republic,” and, our favorite, “creating anxiety in the minds of … Iranian officials.”

A few days go, Huffington Post published the article The Trials of an Educator in Iran written by Anthony Vance. The sad and inhumane account of violating a noble teacher who has given his life to the education of the Baha’i youth in Iran who are barred by their cruel and backward government from attending university because they are Baha’is!

The banning of Baha’is from higher education is a violation of the International Covenant on Economic, Social, and Cultural Rights to which Iran is a State Party. I hope that such a grievous assault on an entire minority group consisting of about 300,000 people will not go unprotested by the world community.

The question is what have we done to make a dent in this infested pool of inhumanity and cruelty? Baha’is are not the only religious minority to be subjected to violence and discrimination, there is no freedom and liberty of worship and religion in Iran for anyone.

The International Campaign for Human Rights In Iran has released a documentary video called:  Don’t Let Ahmadinejad Off the Hook in New York

The civilized world is completely helpless to defend the meek. There are human rights lawyers in Iran, but one by one they are silenced by being arrested before they stand up for the rights of their clients. The BAHA’I WORLD NEWS SERVICE reports “LAWYER ARRESTED AHEAD OF TRIAL OF BAHA’I EDUCATORS”

Abdolfattah Soltani – a senior member of the legal team representing the prisoners – was arrested last Saturday. Mr. Soltani was a co-founder of the Defenders of Human Rights Center along with four other lawyers including Nobel Peace Prize Laureate Shirin Ebadi. The Tehran-based Center was shut down in a police raid in December 2008.

An Amnesty International appeal calling upon Iran to release Mr. Soltani immediately has described him as “one of the bravest human rights defenders in Iran…”

“One by one courageous Iranian lawyers are being summoned and then arrested, or have to flee their homeland,” observed Diane Ala’i, representative of the Baha’i International Community to the United Nations in Geneva.

“We are deeply concerned at the detention of Mr. Soltani,” she said. “What precisely are the motives of the Iranian authorities for this arrest, just before his clients are expected to face trial?”

What can you do?

Share the information; put it on your face book. tweet it, tell your friends, talk to your professors, rite a bog about it, make a video, do something. Do it now!

Another Arrest; It Is a Crime for Baha’is In Iran to Teach or Seek Education!