“Baha’is will commemorate the Day of the Covenant on Nov. 25, and the Ascension of Abdu’l-Baha on Nov. 28. 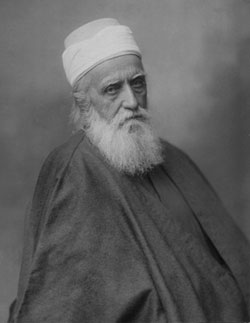 As protector of the Covenant, Abdu’l-Baha, (sometimes referred as the Center of the Covenant), was charged with safeguarding and protecting the Faith against differences and schisms, making it impossible for anyone to create a new sect or faction of belief.

The Covenant of Baha’u’llah is unique in religious history: No other world religion’s sacred scriptures provide such explicit instructions for the organization of the community of believers after the founder’s passing. The Baha’i Faith is thus the first religion in history that has survived its critical first century with its unity firmly established —and ultimately with a blueprint for a divinely ordered global civilization to bring unity to the world.

After the death of Baha’u’llah in1892, Abdu’l-Baha carried forth his father’s mission until he died in 1921 at age 77. Abdu’l-Baha was known as an ambassador of peace, a champion of justice and the leading exponent of the new religion.

During visits to Europe in 1911 and more than 40 cities in the United States and Canada in 1912, he was greeted with respect and acclaim by believers and non-believers. In city after city, he was invited to speak at churches and synagogues, and before distinguished groups and organizations. The net effect was to establish the Baha’i Faith as a major new force for social reform and religious renewal.

Affirming that “Love is the most great law” and that the “supreme need of humanity is cooperation and reciprocity” among all its peoples, Abdu’l-Baha reached out to leaders and the public – indeed, to every soul who crossed his path.

Abdu’l-Baha’s funeral on Mt. Carmel was attended by 10,000 mourners from all persuasions and denominations. He is buried in a vault on the north side of the Shrine of the Bab.”

Here I would like to share one of my most remembered passages from Abdu’l-Baha as a child and youth. We used to hear the end of this tablet in the form of a song by my parents and in Baha’i gatherings. It was a call to come alive with the spirit of love and spiritual life the same way a dead body is revived, a person who is asleep is awakened, an unconscious drunk becomes conscience, with the gladtidings of the rising of the sun of truth.

These words bring me so many memories.

I look forward to the day when all the lovers of light and those who have eyes and ears to see the brightness of the light of unity of all mankind wake up to the call of oneness of God, oneness of all religions and oneness of all humanity as one family living is peace and harmony with one another.

Forgiveness of Human Rights Atrocities, Can We, Should We, Why?

I got this web site from my friend who told me on the topic of this website and now
this time I am browsing this web page and reading very informative articles
here.