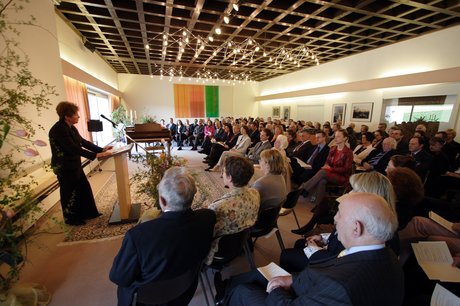 Guests and Baha’is at the centenary reception at Langenhain listen the representative of the city of Wiesbaden,Angelika Thiels, who thanked the Baha’i community for nurturing understanding among religions.

I received so many e-mails of glad tidings about the rising sun of victory of humanity and freedom of religion in Germany in these past few days. This particularly should make the Baha’is of Iran and Egypt most happy. The world of humanity is moving forward.

It took 300 years for Christianity to be recognized as a religion by Constantine the Emperor.

Baha’i Faith is only in its one hundred and sixty eight years since its inception and already is a global and most diverse community.

Sen’s daily Reports that; The Federal Administrative Court in Leipzig has ruled that the Ministry of Religions in the State of Hesse, in central Germany, must recognize the Bahai community as a body corporate. The Baha’i community has 5600 members in Germany, and applied for recognition as a corporation in the state of Hesse, because the National Spiritual Assembly is based in Hesse. The Hesse state government rejected the request on the grounds that Bahai membership was less than one per thousand in the population, which would require 6089 members. The court said that neither the absolute number of Bahais, nor the proportion of the population, was a decisive indication of whether a religious community would continue to exist. The court gave more weight to the fact that the Bahai community had already existed in German for more than a hundred years, is part of a world-wide community, and were able to reorganize themselves after they were banned under the Nazis, and following the reunification of Germany. The legal recognition will reduce the taxes and fees the Bahai institutions pay.

The contrast is between the movement towards the civilized work and moving backwards in Egypt and Iran where the ruling institutions hope to keep the masses in the dark ages!! I hope the genie of progress and human rights stays out of the bottle and the Divine Springtime covers the whole globe not just aiming at the Arab world.

This is a news to be celebrated. Congratulations Germany.

I wish and hope the same good news for the people of Iran and Egypt soon.

Arab Spring is Hit With Locusts; The Egyptian Baha’i Children and Youth are Banned from Attending School!!

could you please explain