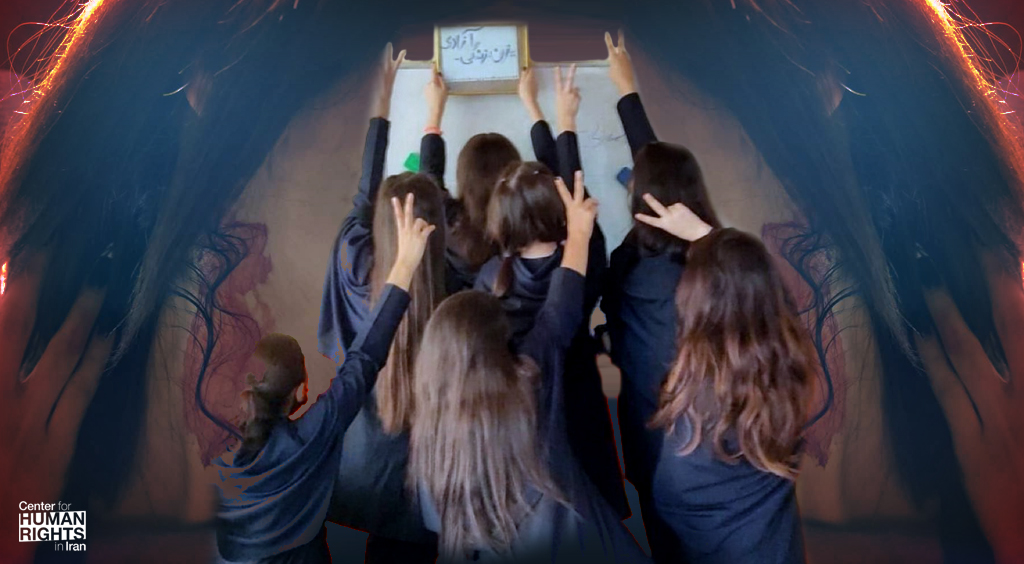 Children Beaten on Streets and in State Custody, Assaulted in Schools

December 13, 2022 – Children in Iran accused of supporting the country’s protest movement are being subjected to physical and psychological torture in Iranian custody as well as in their schools, according to interviews and research conducted by the Center for Human Rights in Iran (CHRI).

“After decades of pushing state propaganda into the education system to brainwash children, the Islamic Republic is finding that kids have become a defining feature of the country’s movement for social and political change,” said CHRI Executive Director Hadi Ghaemi.

“In response, the state is beating, abducting and killing children,” added Ghaemi, “in blatant violation of every legal and ethical standard.”

“The EU, the UK and other governments should recall their ambassadors, downgrade relations, and summon Iran’s diplomats to warn of severe economic and political isolation if the violence against children and others continues,” said Ghaemi.

Children are being subjected to torture in state custody after being arbitrarily arrested, CHRI has learned.

Paria Faramarzi 16, suffered a severe eye injury while she was held for interrogations in Adelabad Prison in Shiraz, Fars province, where she was unlawfully detained without a judicial order for nearly two months. Never informed of why she was detained, she is now facing prosecution.

“Paria was taken to Adelabad Prison without the family’s knowledge,” a source with knowledge of the case told CHRI on condition of anonymity to protect their security.

“After a few days, she was transferred to the hospital and the family was told that blood flow to one of her eyes was blocked due to trauma and needed to be quickly operated on to prevent blindness,” said the source.

Adelabad Prison is normally where prisoners convicted of violent crimes are held.

The plight of workers continues to prompt unrest in Iran. Independent unions aren’t recognized, labor leaders and activists are imprisoned, workers face chronically unpaid wages, and there is widespread discrimination and child labor.

Detaining a 16-year-old in such conditions is a violation of Iran’s commitment to the UN Convention on the Rights of the Child, including Article 37, which states, “No child shall be deprived of his or her liberty unlawfully or arbitrarily.”

Faramarzi was taken into custody during a raid by state security agents on her family home in Madar Soleiman village near Shiraz on October 11, 2022.

After persistent attempts to secure her freedom, Faramarzi was finally released on bail on November 7 and received treatment to restore her vision, yet she still faces prosecution.

Local authorities, in this case led by Majid Derakhshan, an investigator who works for the prosecutor—and whose father, Samad Derakhshan, is the former Revolutionary Guard chief of intelligence in Fars province—are preparing to prosecute the teenager on national security charges that have not been explained to her parents.

His parents said that the last time they were allowed to visit him, Amir’s nails looked “shattered.” Arrested along with two classmates, Jafari has been sentenced to 25 years in prison after being arrested at a protest in the city.

The Iranian Teachers Trade Association also reported on December 8 that three juveniles had been kidnapped by security agents in Abdanan, Ilam province, since December 6, 2022: Pouria Mohammadzadeh (13), his brother Mohammad-Yousef Mohammadzadeh (15), and Yazdan Hasseli (15).

They are being held at an unknown location.

According to interviews with parents in Iran, some teachers, particularly those who teach religion and ethics, have been physically and psychologically abusing children to force them to stop protesting.

The parent of a 15-year-old boy in Shiraz told CHRI that her son’s teacher and principal physically assaulted him class.

“Two weeks ago, the kids had shouted slogans against the government after school,” said the mother, who requested anonymity for security reasons.

“The principal and religion teacher banged my son’s head on the desk so hard that he almost lost consciousness,” she said. “And they hurt his friend’s hand so badly that his parents had to take him to the hospital.

A mother, whose daughter is in 11th grade in Tehran’s 4th District, told CHRI on the condition of anonymity, “When I went to the school and complained about the teacher who had called the young girls ‘dirty’ and ‘filthy’ [because of their alleged improper hijab], the headmaster didn’t allow me to speak directly with the teacher and said she would handle it herself.”

“But my daughter and her friends are young and full of questions,” she added. “They’re from a different generation than their parents; they don’t accept words blindly.”

“The problem is not only physical punishments,” added the mother. “The kids have no desire to go to school because they’re constantly being threatened with lower grades for ethics and monitored by security cameras.”

“When we complain, they just threaten us and say the kids have to be supervised,” said the mother. “We went to the education department, but nobody listened; they just made threats.”

A young couple living across from a high school in Tehran, whose names have been changed to protect their identity, told CHRI they hear children chanting anti-state slogans all the time, as shown in countless video clips on social media.

“We’re used to the kids making noise in the school, but since 80 days ago, we’ve been hearing things that are different,” said Leila. “They never go home quietly and shout slogans at every opportunity.”

On October 23, Iran’s Education Minister Yousef Nouri raised fears of more child killings when he said some students were being taken to psychiatric centers for “reform and retraining.”

On November 27, the UN child protection agency condemned violence against children in the Islamic Republic of Iran.

“UNICEF condemns all violence against children and calls for an end to all forms of violence and abuse that have reportedly claimed the lives of over 50 children and injured many more during the public unrest in Iran,” said the statement.

“UNICEF also remains deeply concerned about continued raids and searches conducted in some schools. Schools must always be safe places for children,” added the statement.

Since mid-September, when Iranian authorities unleashed military forces into cities to crush major protests that broke out across the country following the death in state custody of 22-year-old Mahsa Amini, who Kurdish name was Jina, Islamic Republic forces have been raiding and searching schools where children have been accused of chanting anti-state slogans.

In targeting children and youth accused of engaging in dissent, Islamic Republic forces are responsible for the deaths and killings of at least 50 children, according to the Tehran-based Association for the Protection of Children.

Iran is a party to the Convention on the Rights of the Child, which obliges it to respect, protect and fulfil the rights of children to life, privacy, freedom of thought, and peaceful assembly.

Under the country’s Law for the Protection of Children and Young Adults, ratified by the Islamic Consultative Assembly (parliament) in 2020, any violence against children is prohibited. Yet Iranian laws fail to protect children from physical or sexual abuse, be they in detained for protesting, facing abuse at home, or exploitation.

“The Islamic Republic is among only a handful of countries still executing juvenile offenders, so it’s no surprise that it is resorting to killings and torture to crush dissent, free speech, and freedom of thought among children,” said Ghaemi.

“There is still time to prevent this form of child-killing from becoming another deplorable status quo in Iran,” added Ghaemi. “Without strengthened international action that communicates severe costs and global isolation of the Islamic Republic, more children in Iran will die.”

Time Heroes Of The Year

Office of the Spokesperson U.S. Department of State Press Release On the Iranian People’s Observance of Shab-e Yalda

Universal House of Justice Letter to the Baha’is...

Faith Leaders in United Kingdom Ask for the...